​From a Wall Street Journal Article... 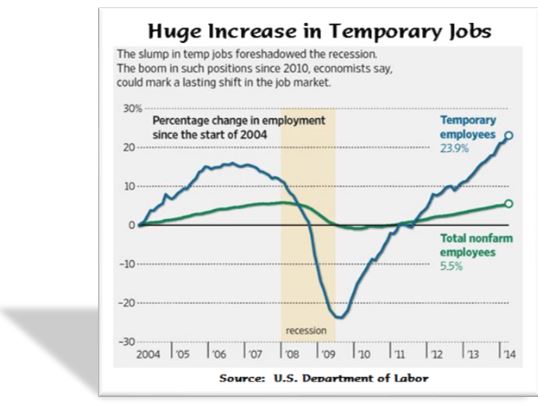 ​Some Experts Say It Marks a Lasting Change in the Economy
The "short-term" staffing industry is enjoying a long-term boom, with temps accounting for more than one-tenth of all job growth since 2009, according to government data.

The job-matching firm CareerBuilder says that in cities such as Cincinnati and Milwaukee, more than half of all jobs created since 2009 are for temp or contract work. In Stockton, Calif., temp posts account for virtually all net jobs added since 2009.

The number of temp jobs has risen almost 10% in the past year, the greatest increase of any of the 150 categories tracked by the Labor Department.

The boost is fueled by companies that reduced hiring amid the recession and learned they can save money in wages and benefits, as well as increase their flexibility, by using fewer permanent workers—even as the economy grows. Technology advances, particularly in manufacturing, have led companies to rethink how many permanent workers they need at a time when temp jobs have become increasingly long term.

For workers, temp jobs traditionally have provided job seekers a path to experience and extra cash as they look for positions with better pay and benefits, and longer-term job security.